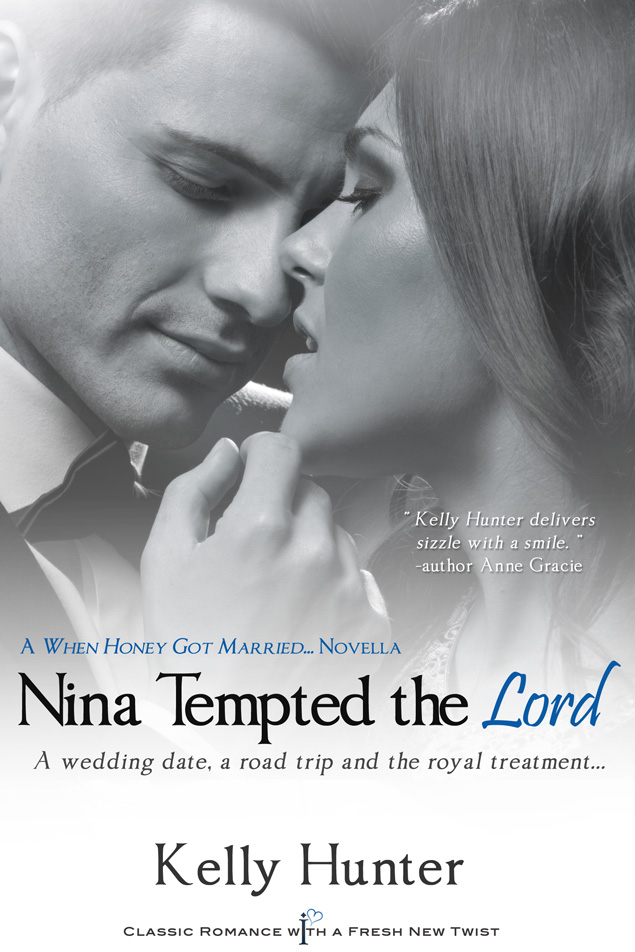 Book 3 in the When Honey Got Married series

A When Honey Got Married… Novella

The sister of the bride needed a date of convenience and who better than her hazel-eyed, mysterious co-worker? If only Nina could keep her hands off his perfect body until she learned his true identity…

This is the third installment in the Honey Gets Married series in which we meet the bride’s sister. This is a series of intertwined short novellas and I don’t recommend it as a stand alone. However, the simple plot, engaging main characters and interesting supporting characters make this an easy read. It furnishes needed pieces to the overall story arc.

The best part of this story is the emotions. This author is really good at capturing the emotions of the hero and heroine. Although the twists and turns are a close second. This book is a part of a series that revolves around Honey’s wedding. And they are all awesome. Just don’t ask me to pick my favorite. I would highly recommend reading all the books in this series at once. It’s just cool.

At seventeen—with a dozen years worth of ballet, gymnastics, and bone-bending focus already behind her—Nina Moreau had quite simply followed the dance.

The circus and Connor Boyd had merely been bonuses.

Connor was long gone—he had the itchiest feet on the planet—but Nina had stayed with the Night Circus, and new friends had gradually replaced the family she’d left behind. The Englishman Alexander Carradice for example, had joined the company some two years ago in the role of finance director. A desk job, one would have thought. No need to get out on the floor and find out what performers needed or what the support staff wanted. No need to figure out how to improve the touring experience or how best to advertise the circus. Not his job. But Alexander Carradice had done all of those things and the circus had flourished and Alex still seemed to spend more time out of his office than in.

Fair of face and exceptionally well formed, Alex was also sharply observant, and Lord, he could be blunt when the mood came upon him.

The mood was very definitely upon him now.

“Nina, if you’re not going to concentrate, get back on the floor before you fall,” he roared from his spotter’s position some forty feet below.

Nina paused, mid-reverse-flag-climb, and shot him a glare, never mind that his aristocratic English accent usually made her want to smile and—on rare occasion—swoon. Yes, the aerial silks were dangerous and involved hanging in midair by a slender bolt of silk or two. Yes, she was a long way off the ground and her Isabella drop had been sloppy. But she’d do it again in a minute, and this time she’d do better. That was what practice was for. “Carradice, what is your problem?”

“You! You are my problem.” Alex matched her glare for glare. “Your timing’s off, your last drop scared me witless, and who knows where you left your focus, because it’s certainly not up there with you. Kat, bring her down.”

But Kat minded Alex, not Nina, and lowered the rig.

“Don’t you scowl at me, Nina,” Alex told her the minute her feet hit the floor, striding up to her, towering over her, because that’s what happened when one person measured in at over six feet and the other one could barely lay claim to being five-four. And a half. “You’ve been distracted for days and you’re driving me nuts. I fear for you up there. I know your concentration’s shot. So either tell me what’s wrong so we can fix it, or stand down and let Kat perform in your stead. She’s ready. You’re not.”

“That is not your call to make,” snapped Nina, and eighteen-year-old Kat winced and tried to make herself even smaller than she already was. “Sorry, Kat.” Nina turned to Kat and tried to put the younger performer at ease. “I didn’t mean you weren’t ready. You need to go take a look at the new performance roster.” Nina allowed herself a crooked little smile. “I think you’ll like it.”

“Now?” asked Kat, and Nina nodded and watched the younger woman hurry toward the door.

This wasn’t the beginning of the end.

Kat wasn’t as good as Nina on the aerial silks.

“C’mon, Nina. Spill.” Alex’s voice had gentled considerably. “What’s got you so spooked?”

“A wedding,” she said with a weary slump of her shoulders. “My sister Honey’s getting married.”

“And she wants me to be her maid of honor. She sent me a dress. It’s sleek and gorgeous and flattering and it fits as if it were made for me.”

“The problem is I haven’t been home in seven years. Not once, since I chose this way of life. I’m kind of estranged from my family.” Nina tugged gently on the silk she still held in her hands, testing the strength in it and the give. “Honey tracks me down and takes me to dinner every year on my birthday. My mother sends money and a card and phones me a couple of times a year. My father sends nothing at all. And now Honey wants me in her wedding party? It’s not going to fly. Honey doesn’t need that kind of stress on her wedding day.”

“Sounds to me as if that decision’s already been made,” Alex offered. “Bride’s prerogative.”

“Seven years, Alex. My father hasn’t laid eyes on me in seven years.”

Kind words. Words that made her want to confide in him just that little bit more. “I’m scared, Alex. Scared of going home and finding that everything has changed and nothing has changed.”

Alex looked around the practice gym as if weighing his options. Finally, he spoke. “Would you like me to come with you? Be your plus-one? I know a little something about family disapproval. Moral support in the face of it is my specialty.”

Maybe, but seduction and the breaking of hearts came effortlessly to Alex as well, and he wasn’t exactly known for backing down in the face of a challenge. He called things how he saw them and he was very fond of taking control.

“If I take you, you’ll cause absolute chaos,” she said with utter certainty. “You’ll charm all the women and the men will want to shoot you and I’ll be the one who brought you.”

“I’ll be the perfect gentleman,” said he of the ratty track sweats and faded T-shirt. “I’ll be so respectable you won’t even recognize me. People will wonder where on earth you found me. They’ll be lining up to congratulate you on landing me. Even the judge.”

“Carradice, unless there’s a wedding ring on my finger I won’t have landed anything. We’re funny that way in the South. What I can guarantee is that if you come as my date, my unfortunate fascination with penniless, no-good circus bums will be confirmed in full.”

Alex smiled, and wasn’t that a sight: all reckless sensuality wrapped up in boyish charm. His shoulders were wide, his body lean, and he had hazel eyes framed by ridiculously long lashes. The less said about his messy, dark-blond hair the better. There was a very good chance he didn’t own a comb. “Or we could play it that way,” he murmured. “Could be fun.”

“Ever use them? Or did someone once tell you that ‘just rolled out of bed’ was a really good look for you?”

Alex grinned some more. So much for Englishmen having bad teeth. His teeth were even and pearly white. “When’s the wedding?”

“Have you asked for time off?”

Nina nodded. “I got the go-ahead this morning.” Which went some small way to explaining her possible lack of focus. “Two weeks’ leave. Kat’s performing in my place. The wedding’s being held in Bellefleur, just outside of Baton Rouge.” Nina unclipped her silk from the rig and started rolling it around her hand, more for comfort than anything else. “I’m thinking I’ll head off on Thursday and drive there. Take a couple of days to get there. Stop and catch my breath along the way.”

He knew her too well. “Still feel like coming with me?”

“I have two conditions,” he said.

“Only two?” Odds were he’d have more than that once he got started. But the knot in her stomach was already easing at the thought of having Alex along for the ride.

“One,” he said, shooting her a quelling glance. “Driver chooses the music.”

I can’t remember whose idea it was for three Aussie and one Alabamian to write linked novellas about a big Louisiana wedding. I do know we drove the gorgeous (and patient) Kimberly nuts as we battled to capture southern voices. Same language, different world. Also, time-zone chaos! You see, we were all awake when Kimberly (our Southern Born Belle) was asleep and boy were we enthusiastically misguided in her absence. Truffled Breast of Swan anyone? Stuffed hummingbirds and bees as table arrangements? No? What about alligators? Surely we can have some of those … (No). Never mind. I know they’re there.

The books in the series are: 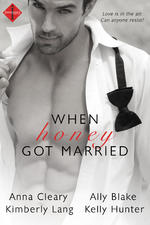 When Honey Got Married

When Honey Got Married

Four 15,000 word, closely linked short stories, all of them based around a glamorous Louisiana wedding. The stories are available in Anthology format, as well as individually. Look for ‘When Honey Got Married’ if you’re after all four stories.

The books in the series are: 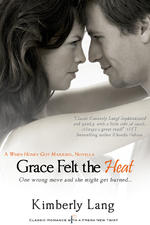 Book One: A wedding planner and her high school crush? Food for thought. 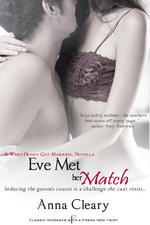 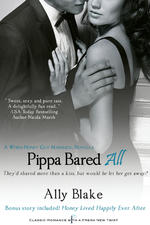 Pippa Bared All by Ally Blake

Book Four: Will Pippa’s feelings for the groom’s brother be her downfall?