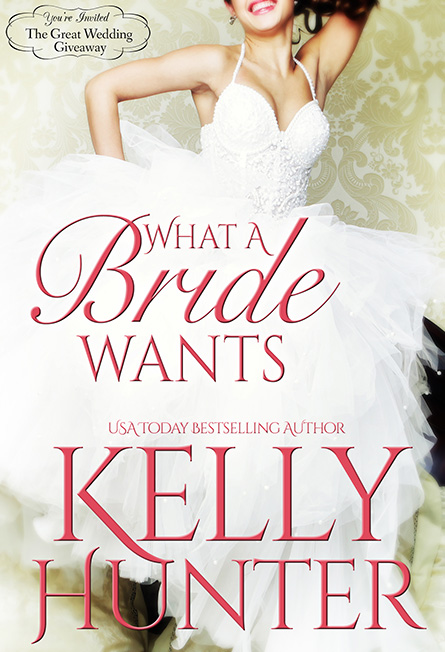 What a Bride Wants

Book one in the Great Wedding Giveaway series

What a bride wants…
Ella Grace Emerson adores her father but he keeps trying to marry her off to every eligible rancher in Montana. When he puts an ad in the paper on her behalf—for a docile house-husband—Ella retaliates with an ad of her own, pinned to the noticeboard of the local saloon. No husband required, housebroken or otherwise. What she wants is the perfect lover.

What a bride needs…
Newcomer Cam Sawyer is perfectly willing to tear up the sheets with Ella and be her partner in chaos. She wants a bad boy and he’s had experience aplenty. But what she really needs is a strong and loving partner, and until Sawyer stops running from his past he can never be that.

Sawyer’s the one Ella wants. But can he be the man she needs?

Hunter’s engaging romance is funny and laced with intrigue. Readers will especially enjoy the fiery attraction that the main characters share. This short story can easily be read to spice up your lunch hour or before bedtime with a promise of sweet dreams. Jaime A. Geraldi for RT

“The Great Wedding Giveaway” is off to a great start with Hunter’s novella. A little steamy, a little suspense, a little comedy all make for a fun and sassy romp across Montana cattle country.

“Yes, I know he’s perfectly presentable and possibly a very nice person. Second-born son from a good ranching family. All good things. It’s just that when he looks at me he sees Emerson Holdings and award-winning bloodlines—money on the hoof. He doesn’t see me.”

Ella Grace Emerson leaned against the walnut desk and watched with fond exasperation as her father paced the length of his study. He stopped and stooped to add another block of wood to the fire that sat snug within the stonework of the study’s western wall. A huge picture window took up most of another wall and in the distance loomed the soaring, snow-clad Crazy Mountains of Montana.

The charity dinner they’d just returned from had dragged on late into the evening. They’d been seated at a table of eight that had included Joe Carter and his middle son, Max, and the blatant matchmaking efforts of both fathers had been enough to set Ella’s teeth on edge.

Max’s half-baked interest in her good-self had done the rest.

“It was worth a try,” her father argued. “You and Max have similar social status, similar interests. It could have worked well.”

“That’s what you always say. And it never does. Daddy, I am not a cow to be bred. You need to let me find my own man.”

“But you don’t.” Samuel T. Emerson threw up his hands. They were good hands, big and scarred and strong. They’d picked her up over the years and held her tight when she’d come off a horse. When her mother had died. When her high-school crush hadn’t invited her to the prom. “Where are you going to find this man, Ella Grace? Out here with the cattle? Roaming around Marietta? Livingston, maybe? At least Livingston has more variety than Marietta, but wait … you never go there. You’re buried here. You could travel anywhere. Canada. Australia. Europe. But you don’t. You haven’t had a holiday in three years.”

“Has it really been that long?”

“Hardly on the shelf.”

“—and opinionated as all get out, for which I take complete responsibility.”

“Surely I should take some—

“And I would see you happily settled before I die.”

“I am happy. And I don’t feel at all unsett—” She broke off as his words filtered through, and stood up hastily so that she could keep him in view as he headed for the sideboard and the crystal decanters of liquor that lived there. She eyed him worriedly, tried to look closer, but was hampered by flickering firelight and a face full of shadows. “Wait. Dad, are you sick? Is that what all this is about? You’re dying?”

“No! No faster than the next man. Lord, Ella, but you’d test the patience of a saint.” Her father poured himself a hefty two fingers worth of bourbon and downed the liquid in one long swallow.
“Where’s mine?”

“You’re not the one second guessing everything you’re about to say.” He put down the cut-crystal glass and turned to face her, his blue eyes not nearly as bright as they’d once been. He seemed to stoop a little, his suit sat his shoulders more loosely than it once had, and it dawned on Ella that, sick or not, her father was getting old. “Ella Grace, I’ve spoiled you rotten. You’re used to giving orders and having them obeyed. You’d cut a man down as quick as look at him, especially if you know that he has ranching interests of his own. Why do you do that? I’ve taught you everything I know about cattle production and ranching, and I know you love this life and this land. Max would have been a good fit for you and the business both, but you made no effort with him tonight at all. None.”

“You’re wrong. Max and I both made an effort to get to know each other at the start of the evening, but there was no spark.” Did she really have to spell it out for him? “Isn’t this my prettiest dress?” The gown was several years old, but still stylish enough to make her feel good about wearing it. It made the most of her breasts and showcased her toned and slender arms. It cut in at the waist and out again to fall softly over her hips. It was neither too sexy nor too old-fashioned. The color was a deep and luscious scarlet and suited her creamy skin and dark brown hair to perfection. Ella had made an effort to dress well tonight. She’d even worn jewelry and that practically never happened. “Don’t I look presentable?”

“And,” Ella smelled her wrist and wafted it gently in her father’s direction, “I smell like gardenias. And Max smelled good too and looked very presentable, but there was no attraction between us. And if there’s no chemistry now, what with both of us looking our best and being on our best behavior, what hope is there for chemistry later on? Daddy, I want the spark. The lightning bolt.” The lust. “And then once that’s in place I’ll see what I can do when it comes to cultivating the love.”

“I so wish your mother was here.”

“Daddy, please—” Her mother had been gone for fifteen years now and sometimes Ella wished for her too, but not nearly as often as she once had. “You’re doing okay.” She crossed the room to stand in front of him, touched him gently on the forearm—a little reminder that she was still here, living and breathing. They both were. “We’re both doing okay. Aren’t we?”

“Yes.” He cleared his throat and covered her hand with the warmth of his own, patting it once, twice, and then that was enough when it came to Samuel T. and rampant displays of affection. “I should send you to Dallas. Make you go and live amongst people your own age.”

“But I have lived in Dallas. For a year. In a little concrete box of a dorm room.” Ella shuddered. “Dallas got old fast.”

“Or I could put a personal ad in the paper for you,” he grumbled. “Lapdog wanted for headstrong cattlewoman of marriageable age.”

“I do like lapdogs.” Ella nodded encouragingly. “Not that I’ve ever had one. And let’s face it, Max wouldn’t have made a very good lapdog at all. He’d have been opinionated and commanding, and eventually he’d have wanted to run this place.” And then all the other places they owned, given that Emerson Holdings consisted of not one ranch but three, along with a sizeable livestock transport business. “That’s my destiny.”

Her father groaned. “I miss her so, so much.”

“I know you do.” Ella reached up and put her arm around her father’s shoulder. He was a good, strong man and a fair boss, and she loved him to bits. He just had a thing about wanting to see her married.

Ella had nothing against the notion, but she knew what she wanted in a partner and it was a hard combination to find. A man as strong and as capable as her father. A man who was driven. A man who had pride. A man who had no interest whatsoever in running Emerson Holdings … and therein lay the crux of the problem. If Ella was the one running the ranch, what else was there here for such a capable man to do? “I know you want me to find someone, and I want to, I do. And he’ll fit me and Emerson Holdings to perfection, you’ll see. Just let me do it my way.”

“Your way’s not working.”

Stubborn old goat, but she hugged him again anyway. “Neither’s yours.”

This was my first book for Tule Publishing Group and launched their Great Wedding Giveaway multi-author series in March 2014. All eight authors writing for the series set their stories in the same small, fictional Montana town called Marietta (think Livingstone). I knew I could write cowboys. I wasn’t sure I could write Montana. Solution: go there and explore, fall in love, eyeball bears, and become involved with Tule Publishing Group to the extent that I then launched their internationally-voiced Holiday Imprint and stayed on as Holiday’s executive editor for the next two years. Life is good. And Montana rocks.

The books in the Great Wedding series are:

A series set in a small-town, fictional world called Marietta, Montana (think Livingstone) and based around a promotion by the community to promote their town as a wedding destination. Hijinks ensue!

The books in the Great Wedding Giveaway series are: 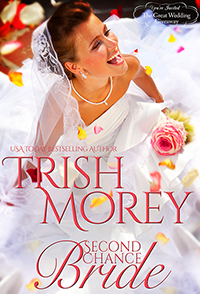 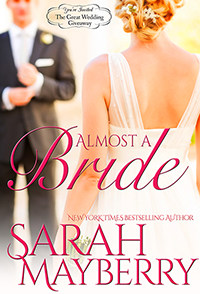 Almost A Bride by Sarah Mayberry 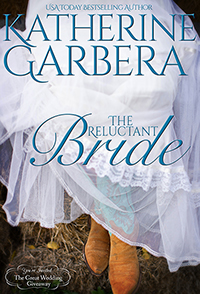 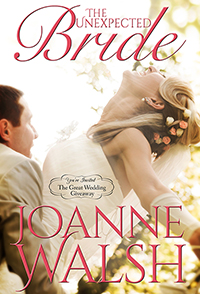 The Unexpected Bride by Joanne Walsh 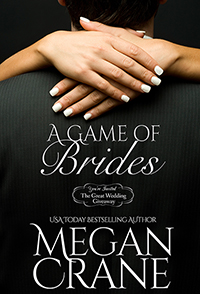 A Game Of Brides by Megan Crane 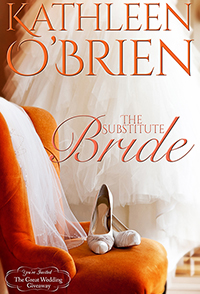 The Substitute Bride by Kathleen O'Brien 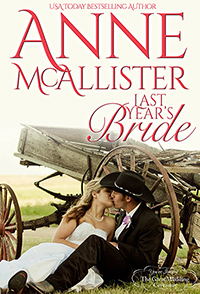 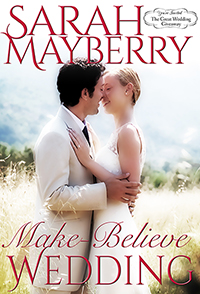