It’s no secret that I love to explore family dynamics when writing series romance. First came the Bennett family. Then came the Wests – two brothers and two sisters – I’m still finishing the Wests (there’s one brother left to write). I’ve just started a new family series – three brothers this time, with a family name of Jackson. As usual, I’ve started with the youngest. 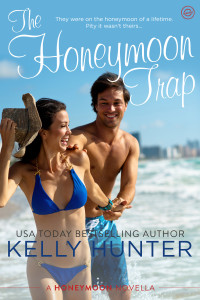 Being the youngest brother in a hero-driven trilogy is challenging. The youngest son doesn’t have the same intrinsic status as the first born (or even the second born) son. And when the first born, and second born, are sharing those first few pages with your hero – potential heroes, all of them – the going can get a little rough for the baby of the family. Which brings me to romance writing rule number #4621. Never let your secondary characters undermine your erstwhile hero.

I break this rule a lot. And then I shuffle up and pay my dues. You break it, you fix it. Meaning that at some point in the story, the baby of the Jackson family is going to have to get his alpha on.

The Honeymoon Trap starts with a computer gaming scene between three brothers and a young woman. The oldest brother is Cutter. Middle brother is Caleb. Our erstwhile hero here is Eli, the youngest. The heroine’s name is Zoey. Within the game, Eli’s character is marrying Zoey’s character for a boost (more powers, better recovery time etc.). Eli’s brothers, being older brothers, can’t help but have some fun.

‘We should get this wedding underway. I love a good wedding. All rise.’ Cutter had suddenly developed a lisp worthy of a television cardinal. ‘Dearly Beloved. We are gathered here today to witness the blessed union of this man, and this woman, and… who’s got the rings?’

‘There’s really only one ring,’ Caleb intoned. ‘And I don’t think it’s available.’

‘We don’t need rings,’ Fuzzy said. ‘We don’t even need a ceremony.’

‘No ceremony?’ Cutter sounded deeply offended. ‘At all? What kind of wedding is this?’

‘Eli, how old are these brothers of yours? Have they hit puberty yet?’

‘So how old are you?’ Fuzzy didn’t wait for his reply. ‘Good grief, I’m marrying a two-year-old.’

‘He’s twenty-six.’ This from Cutter. ‘Are we ready? Because, seriously, our boy here’s so shy with women that this could well be his only chance at heavenly matrimony. All rise—

‘Be right back.’ Eli pushed away from the console with undue haste. He wasn’t panicking, much, he just… beer. He needed another beer, never mind the recently opened bottle sitting right there on the table. He needed pretzels and more beer. Possibly new brothers. Preferably no brothers, except that they were going to help him put a wall full of windows in this place this weekend so maybe he could disown them after that. He plucked a beer from the fridge and a bag of pretzels from the cupboard and took his sweet time returning to the game. He put on his headset, took a deep breath and reminded himself that it was only a game. ‘Am I married yet?’

‘Yes!’ Zoey sounded a little desperate. ‘It’s done. There was cake. Is anyone beside me ready to play the game?’

The Honeymoon Trap is available from Amazon at a launch price of $0.99c for 2 days only, then it reverts to a regular price of $2.99.

What A Bride Wants