A prequel short story for the West Family series

Hardworking and independent Jess Turner has come home from the bustle of Sydney to enjoy a quiet Christmas. But after running into an old school friend, she finds herself talked into attending a lavish Christmas Eve party and running straight into the only man to ever break her heart.

Rebel with a heart Boyd Webber thrives on the adrenaline rush of riding motorbikes for a living, but giving into love has never been a risk worth taking. Until he sees Jess again. Their chemistry is still electric and Boyd can’t give up the chance to rekindle what they once had. But if they’re going to have a future together, they’ll have to find a way to get past old hurts in time for Christmas Day…

It is light and short and funny to read. A good price and being digital no storage problem. You can not go wrong.

This is a great story about past lovers and friends in a small town s great read Boyd and Jess have been though so much together growing up and now that both of them have improved their lives they are back together :)

Jessica Turner stood just inside the wide open French doors of the sprawling seaside home and looked out over the crowd of beautiful, laughing people, all intent on having fun. West family Christmas Eve parties were legendary. Invite only, and Jess had been invited. By Trig Sinclair who she’d seen down the street that morning, and after Trig had hugged the breath straight out of her and asked her what she was doing tonight, he’d said come to the party. Plenty of the old school crowd were going to be there, he’d said, and the West’s wouldn’t mind. Given that Jess had been planning to spend Christmas Eve watching movie reruns in her hotel room, she’d said yes.

So here she was.

Distinctly overdressed amongst a sea of bathers and board shorts, skimpy sarongs and glistening, beach-bronzed skin.

She hadn’t asked about the dress code and she’d got it emphatically wrong. Nothing she could do about her pale pearly skin. Plenty she could have done when it came to wearing something a little less formal, even if her crimson chiffon shift did only fall to mid-thigh in gentle swishes. It still wasn’t quite right. She felt out of place, a half-step out of sync with everyone else.

The house was huge, the deck a luxurious extravagance and the garden and beach beyond promised space for the party to spread.

Jess looked for a familiar face, any familiar face in the crowd, and came up empty. Those movie reruns were sounding like a good option for her right about now. She studied the faces in the crowd a little more closely the second time round. She hadn’t been home in four years. People changed in four years. Surely there was someone here she knew?

And then she did see a face she knew, a profile she had no hope of ever forgetting. The sharp cheekbones and the stubborn jaw. The nose that had been broken more than once – she’d re-set it herself at least twice. The owner of that face had patched her up plenty too. He’d sewn two ragged stitches into the curve of her eyebrow once, and though the gash had knit together straight and true, no hair had ever grown over that thin silver line.

The one and only.

Boyd had been her childhood confidant and her refuge when her father’s fists got rough. He’d been her cheer squad when she’d started pulling good grades, studying with her even though his own grades had never amounted to much. He’d been her first dance, first kiss, first love. First and only man to ever break her heart.

She’d figured he might be here this evening, figured she’d take her chances.

Now all she wanted to do was turn and run.

Jess turned to leave and made it two steps toward the door before a hand caught her by the arm. Jess turned and found Lena West regarding her warily. Lena, with her wild gypsy tresses, stunning blue-grey eyes and in-your-face boldness. Lena had been a year below Jess at school. They hadn’t been more than casual acquaintances.

Lena couldn’t seem to find the right word for what Trig was to Jessica.

‘Trig’s old school friend, yes. I saw him down the street this morning and he asked me what I was doing tonight and said come, because some of the old crowd would be here, but I don’t think—I mean—it wasn’t a date or anything. I didn’t take it as such. Trig’s just—friendly. And maybe a little too free with invitations that aren’t his to make,’ Jess added hesitantly under the weight of those sharply assessing eyes.

‘Oh, the invitation was his to make,’ Lena assured her, and blithely swept away one of the concerns Jess had about being here tonight. ‘This is a Sinclair-West party. Trig’s folks are here somewhere, if you know them. His older brother?’

Jessica shook her head. She didn’t know Trig’s family, not really. She’d met them when they’d taken pictures of her and their son on prom night, that’s all.

Lena eyed her curiously. ‘There was something between you and Boyd once, right?’

‘It was mostly just heat.’

Something in her voice made Lena tilt her head and smile. ‘You’re unimpressed. I like that. You look gorgeous, by the way. Elegant, sophisticated and in control. I like that too. Promise me you won’t leave until you’ve at least given Boyd the opportunity to gaze upon that which he let slip away.’

‘You’re a little bit evil, Lena. You know that, don’t you?’ said a deep voice and Jess turned and there stood Lena’s brother, as forceful and compelling a presence as ever, never mind his easy smile.

Jess smiled carefully, for there was a darkness to Jared that neither the forthright Lena nor the easygoing Trig possessed. ‘Hey, Jared. Been a while.’

‘No, you’re a sensitive host who doesn’t want one of her guests to feel uncomfortable.’

‘I was working on it,’ Lena protested. ‘I was in the middle of telling Jess who else was here that she might know. How is that not being a good host? Besides, I don’t even know where Trig is. He was here for five minutes at the start of the party and then he left.’

Lena swore, an emphatic little punctuation mark that made Jess bite back a smile. Call it a hunch, but Cassandra didn’t sound like Lena’s favorite person—which probably meant that Cassandra was Trig’s latest girlfriend. The Wests were possessive, simple fact. Possessive of each other and of Adrian ‘Trig’ Sinclair. Maybe it was healthy. Maybe the tightly woven bond between Lena, Jared and Trig wasn’t weird at all.

Lena sighed and her gaze cut back to Jess. ‘Stick around. I’ll go get Trig for you.’

Lena moved off. Jared steered Jess towards a wet-bar that wouldn’t have looked out of place on a cruise ship.

‘Champagne?’ he asked and when she nodded, he poured her a glass, got a beer for himself and touched the neck of his bottle to her glass.

‘So, picking up where my sister left off… are you avoiding Boyd this evening or pursuing him?’

‘I’m staying neutral this evening, when it comes to Boyd. Like Switzerland.’

‘Just so you know? That dress you’re wearing? Not neutral.’

‘That’s what they all say.’

Jess smiled. She could handle Jared’s banter—the lazy knowledge and the sharpness beneath. Trading words with Jared was good practice for when she finally came face to face with Boyd.

Jess took a deep breath, sipped her champagne and looked around the crowd again. She could do this. Come to a Christmas Eve party in her home town and enjoy the company of old acquaintances without falling apart. She had worth now. A good job as a physiotherapist and a life lived in Sydney. She didn’t need Boyd Webber to tell her that a full ride university scholarship gave her a shot at a better life. She didn’t need him saying that if she wanted to break the cycle of poverty and violence she’d grown up with, this was her chance.

She’d taken that chance and made the most of it. Boyd could hardly berate her for that. And if Boyd asked her why she’d come home for Christmas, well… all she had to do was tell him the truth.

That sometimes, just sometimes, she missed the ocean and the beaches, the rhythms of small town life and the fantasy of family who might one day give a damn about her.

That was the truth, even if it wasn’t the whole truth.

No need to mention to Boyd just how much she missed him.

This story was first conceived as a free short story to coincide with one of the West Family releases, and with that in mind I got playful. Ten thousand words, five point-of-view characters, one Christmas Eve and the rekindling of romance … why not?

And then marketing plans changed and the story didn’t go free after all.

Still, I got a taste for building into a singular story event using several different POVs—a technique that adds texture and depth, and one I rarely use when writing romance. The story technician in me was very happy with the new toy in the toolkit. 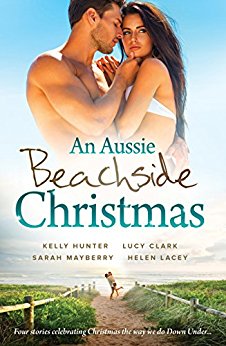