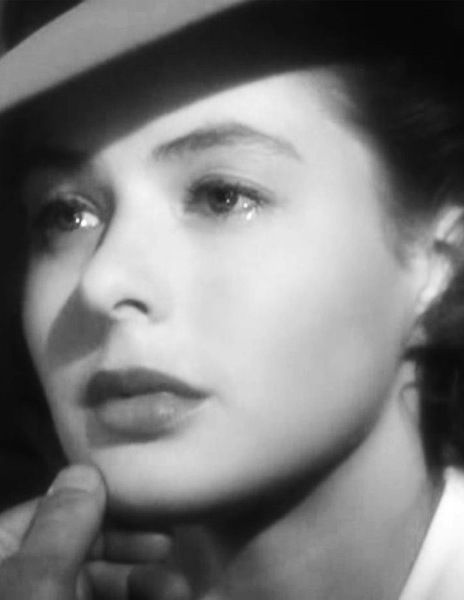 The 1942 Warner Brothers movie Casablanca has so many iconic lines of dialogue that we’re spoilt for choice when it comes to studying them. “Of all the gin joints, in all the towns, in all the world, she walks into mine.” We could start there. We could round up the usual suspects and play it again. It could be the beginning of a beautiful friendship. This film is a dialogue banquet. And much of it is deliciously ambiguous.

People talk in circles in Casablanca. They don’t say what they mean. It’s not safe for people to say what they mean. Not politically. Not emotionally. Instead, much of the dialogue is written to be opaque. No one quite knows what other people will do or say in any given situation. It’s one of the film’s strengths.

Here’s the plot. Our hero Rick (played by Humphrey Bogart) is an expat American who owns a gambling-den/bar in Casablanca. Heroine Ilsa (Ingrid Bergman) is an old flame of Rick’s who turns up on his doorstep alongside her resistance-fighter husband. Ilsa and her husband need to flee to America. Rick is the only one who can help them, but he won’t–at least not initially. You see, Ilsa’s not just any old flame, she’s THE old flame. The one who betrayed him, broke his heart and ruined him for all other women. Rick’s bitter (and beautifully lit in this scene, in more ways than one).

As a romance writer and reader, I know Rick’s type. He’s worldly, cynical, jaded, morally bankrupt … and utterly at the mercy of his emotions when it comes to the woman he loves. Bogie doubles down on Rick’s emotional vulnerability and proceeds to break hearts.

If you’re after a scene by scene breakdown of the film, try Robert McKee’s story seminar. In it he likens Rick to America and Rick’s bar to a miniature U.N.. At the start of the story, Rick “sticks his neck out for no man”, symbolizing the U.S. not getting involved in WWII. By the end of the film he’s chosen to support the allied war effort and has stuck his neck out for a woman. Yes, that woman. The one he puts on a plane to America, with her husband. The woman he maybe, possibly, probably (Oh, hell, I don’t know. Do you know?) loves.

Rick’s not one to outright tell Ilsa he loves her. For all his sentimentalism, he never says the words. That’s not his way. As soon as Rick realises that he IS the grand love of Ilsa’s life, he starts planning to put her and her husband on the first plane out of there. Just sayin’. He then proceeds to list all the reasons why he and Ilsa shouldn’t be together. It’s a long, dramatic, dreadfully noble and self-sacrificing list. Don’t examine it too hard with modern-day sensibilities, because it won’t hold up. Hills. Beans. Paris. Where he’s going, she can’t follow (I belly-laugh at that one. Now, now … don’t judge me). And then my favourite line of them all:

ILSA: No, Richard, no. What has happened to you? Last night we said —

RICK: — Last night we said a great many things. You said I was to do the thinking for both of us. Well, I’ve done a lot of it since then and it all adds up to one thing. You’re getting on that plane with Victor where you belong.

RICK: — You’ve got to listen to me. Do you have any idea what you’d have to look forward to if you stayed here? Nine chances out of ten we’d both wind up in a concentration camp. Isn’t that true, Louis?

ILSA: You’re saying this only to make me go.

RICK: I’m saying it because it’s true. Inside of us we both know you belong with Victor. You’re part of his work, the thing that keeps him going. If that plane leaves the ground and you’re not with him, you’ll regret it.

RICK: Maybe not today, maybe not tomorrow, but soon, and for the rest of your life.

ILSA: But what about us?

RICK: We’ll always have Paris. We didn’t have, we’d lost it, until you came to Casablanca. We got it back last night.

ILSA: And I said I would never leave you.

RICK: And you never will. But I’ve got a job to do, too. Where I’m going you can’t follow. What I’ve got to do you can’t be any part of. Ilsa, I’m no good at being noble, but it doesn’t take much to see that the problems of three little people don’t amount to a hill of beans in this crazy world. Someday you’ll understand that. Now, now…

Ilsa’s eyes well up with tears. Rick puts his hand to her chin and raises her face to meet his own.

RICK: Here’s looking at you, kid.

I love this line. I’m baffled by it. Smitten with it. It’s Rick, in all his glorious ambiguity. Maybe that’s why it works.

Is it a toast? There are drinks in his hand the first time he says it.

Is it a poker term? Yup. There’s a story about how this line first came about. It wasn’t scripted, it was a Bogie ad-lib. Bogie was teaching Bergman how to play poker in their downtime, so the story goes. One of the poker terms he used was “here’s looking at you”, meaning “it’s time to show the cards in your hand.” Bogie said it during one of his early romantic flashback scenes with Bergman and the line stayed. It became a signature line, loaded with subtext.

Is it a declaration of love?

Does it mean “See you round?”?

Does Rick really see Ilsa as a kid?

Rick says “Here’s looking at you, kid” three times to Ilsa over the course of the story, but does his perception of her ever change? Does he ever really see Ilsa properly?

He doesn’t at first. He falls in love with a woman he barely knows. But here, at the end of the film, Rick knows far more about Ilse and the reasons behind the choices she’s made. He sees her now. He sees how she can have love in her heart for both her husband and for him.

Ilsa doesn’t know which man to choose so she asks Rick to choose the way forward for all of them. So he does.

He puts Ilsa and her husband on the plane to America and then walks nobly off into the night with Louis, former head of French police, presumably to join the resistance fighters and do good deeds. Love! Sacrifice! Redemption! Bravo, Rick, you big hero. You finally stopped looking at Ilsa.

As for me, I stopped looking at Ilsa long before she got on that plane. As gorgeous, complex and conflicted as she was, she was never my romantic ideal.

If you’ve stuck with the post this far, I’ve been waxing lyrical about film dialogue on the first day of every month for a couple of months now. I’m calling it a craft building exercise (as opposed to frivolous procrastination–which it also is). So far I’ve covered dialogue from “Love Actually” (here’s the link) and “Romancing The Stone” (link here).
Next month? I’m not sure whic film to cover. The Princess Bride? Bringing Up Baby? Any suggestions?
Back to Casablanca. What’s your favourite quote? Your favourite scene? And does anyone feel like singing La Marseillaise?

Books To Make You Cry