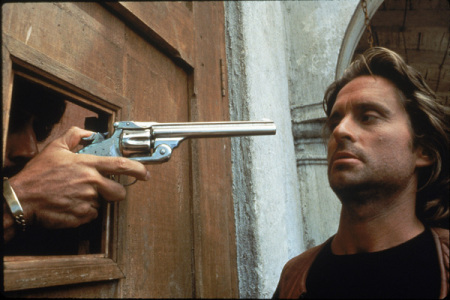 Romancing The Stone may be over thirty years old but it’s still my favourite romantic adventure romp–mainly because of the loving way it treats its main character. It takes about thirty seconds of screen time to hook me into Joan Wilder’s romance-writing world. The tears at the end of a story, the failure to shop for necessities. Celebrating The End (alone, with the cat, who understands). I know this woman. She’s me. As the story progresses and becomes increasingly far-fetched, I stay with it. Why? Because I’m having fun, it’s making me laugh, and if I wanted to–yeah, if I wanted to–I could overcome all innate shyness and insecurity, jump a plane to Columbia, meet the man of my dreams, befriend or defeat all bad guys, find lost treasure, save my sister, let the man of my dreams go … and still emerge satisfied, smiling and richer for the experience.

Because that’s how we romance writers roll.

So that’s more or less the plot (read Alexandra Sokoloff’s Romancing The Stone story breakdown for a better version). And the scenery’s gorgeous and the pace rarely lets up and there’s plenty of on-screen chemistry between the romantic leads. Bring on the critical and financial success!

Me, I’m in it for the dialogue. More specifically, I look for dialogue attached to moments in the film that bring forth a strong emotional response. Tears, laughter, screams–gimme!

It doesn’t take long to figure that Romancing The Stone is being played for laughs, especially once Jack T. Colton arrives on the scene. He’s an intrepid opportunist who’ll escort our heroine to safety–for a price:

Jack: My minimum price for taking a stranded lady to a telephone is 400 dollars.

Joan: Will you take 375 in traveler’s checks?

This dialogue reveals character, helps set story tone and there’s bonus brand placement (even if the currency they’re bargaining with appears to have no current value whatsoever). They’re dreamers, both, disinclined to let reality get in the way of their plans. You’ll find them connecting on this level over and over again. And it’s usually wrapped up in a laugh.

There’s another moment in Romancing The Stone that makes me laugh, no matter how many times I’ve seen it. It happens just after Joan and Jack have left the jungle, entered a village and are looking for transport to take them elsewhere. Unfriendly locals direct them to the local drug lord’s house. They knock on the door. Jack insults the drug lord with the first words he utters (not really very good with his words, Jack) and they get turned away at gunpoint. They’re surrounded by bad guys. They’re outnumbered and seemingly out of options. And then, with a few deceptively simple lines of dialogue, the story turns.

There’s a lot of repetition here at first glance. Yes, she’s Joan Wilder. Yes, she’s a novelist. We know. Unexpectedly, the drug lord is a big fan. That’s kind of funny. I’ll laugh to that. And yet … how about rerunning that scene again? Because beneath the superficial simplicity, this is a very fine example of clever, hardworking dialogue.

Want to break it down and figure out where the magic lives?

“Okay, Joan Wilder, write us out of this one.”

Snarky Jack. I don’t think you value Joan or her occupation very highly at this point. But you will. Because Juan the drug lord’s appreciation of Joan’s stories is about to allow you access to Juan’s resources. Joan surely does write you out of this one.

Who? Go on, ask her again. Okay, no, don’t! But for those of us looking for a verbal cue for Jack, the audience and even for Joan to wonder who she is at this point, this is it.

Oh, c’mon. We know! Why put that line there? Isn’t it superfluous at this point? Well, no. Not if you’re tracking the power exchanges throughout the scene. They walk into the village with Joan following Jack’s lead. This gets them a face full of guns until Jack mentions her name, which leads to all eyes on Joan. What’s she going to do? Step up and use her resources (her reputation as a novelist) to try and get them out of their predicament? There’s no shame in being a novelist, is there? Step up, Joan! How about you take the lead here?

Juan: “I read your books. I read all your books!”

To drug lord Juan, novelist Joan Wilder is someone to be celebrated. He loves her work. He reads all her books. On Saturdays. Aloud. To his men. Of course he does. Notice how Juan doesn’t label Joan’s stories romance? Maybe you didn’t notice. I noticed. Probably a romance writer thing. Because beneath that initial laugh, there’s some interesting social commentary on gender and genre reading habits. This film wants you to believe that a lot of people enjoy reading Joan’s stories. Even men. Even macho drug lords and their underlings. Just don’t call it romance?

By the time the film credits start rolling, Joan Wilder is a strong, successful and self-assured woman being wooed by Jack the gator-wrestling hero. As for me, I’ve attended a masterclass in dialogue, belly-laughed my way through the popcorn, admired Joan’s transformation, lusted after Jack’s boots, boat, and dimples, and sighed my way through the happy ending.

My only problem is with the way this film gets categorised. How come so many film sites label this one Action/Adventure/Comedy? What, no romance? You liked it, just don’t call it what it is?

If you’ve stuck with this post this far, I’ve a plan to look at a favourite piece of dialogue on the first day of every month, be it from film, song, a book or whatever popular entertainment form I happen across. I’m calling it a craft building exercise (as opposed to frivolous procrastination–which it also is). Last month we looked at “Love Actually” dialogue. Here’s the link.

So. Back to Romancing The Stone. Favourite moment in the film? Do you have a favourite line of dialogue? I’ve used the “My minimum price for taking a stranded lady to a telephone is four hundred dollars” line on my sons. They didn’t get it. I laughed regardless. Maybe I should tell them to go watch this really cool old Action/Adventure movie …